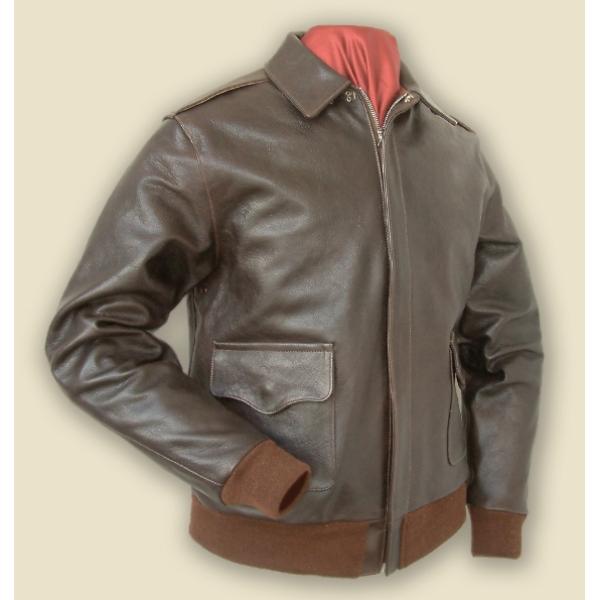 The A-2 flight jacket is without doubt the most famous of all WWII flying jackets.


Standardised as the Type A-2 flight jacket, on May 29th 1931, as the regulation Army Air Corp intermediate flight jacket, it was used until the end of the war.

Initially, it was intended that the A-2 flight jacket be made from Horsehide leather only. However, by the mid '30s, Goatskin and later Steerhide, were also approved.


The official colour was called 'Seal Brown', but it transpired that this colour was represented in many various shades. Indeed, references to other shades, namely Russet and Havana were also used.


Of a quite basic design, the A-2 flight jacket saw action in every theatre of WWII.


Pilots and aircrew regarded their A-2s as companions, more than simply items of issued clothing. The scuffing and burnishing of the leather brought personalised character to the garment, giving the veteran wearer an aura of unofficial ever increasing rank through experience.


Today, original A-2 flight jackets are hard to find, and fetch high prices in the collectors’ market. Acquiring an original example from the veteran himself is the ultimate find, its confirmed history holding the charisma of a desperate and victorious period.


The Eastman A-2 flight jacket represents the spec in its most typical form.


It's available in 3 hide types: Horsehide, Goatskin & Steerhide, which in turn are available in two shades of brown: Seal & Havana. The hide in each case is veg-tanned.


During most of the period that the A-2 was originally produced (1931 – 43), veg-tanned hides were used. It was only towards the end of this period that Chrome tanning became utilized. We prefer to use veg-tanned hides, as they are more typical of what was used during that period, and thus most authentic. Accordingly, the look and feel of a reproduction made from this type of hide best emulates the vintage appeal of the original.


Needless to say veg-tanned hide is not easy to find in the 21st century. It is only by special request that some tanneries are prepared to produce such material. It is much more time consuming to prepare, and generally more difficult to get right. Thus it is more expensive. But expense cannot be spared if the definitive reproduction is the goal.

Our endeavour to find the very best skins that are made using this process has been exhausting, but worth it. After dying and finishing, we are very satisfied that our hides reflect the closest possible specification to that found on originals you're ever going to find.


For this particular product we use a beatiful veg-tanned Goatskin which is specially designed to show off the grain of the hide, as was typical of the leather character seen on many of the wartime examples.


All the other materials and trim that go into an Eastman A-2 are equally as authentic of course. Including: