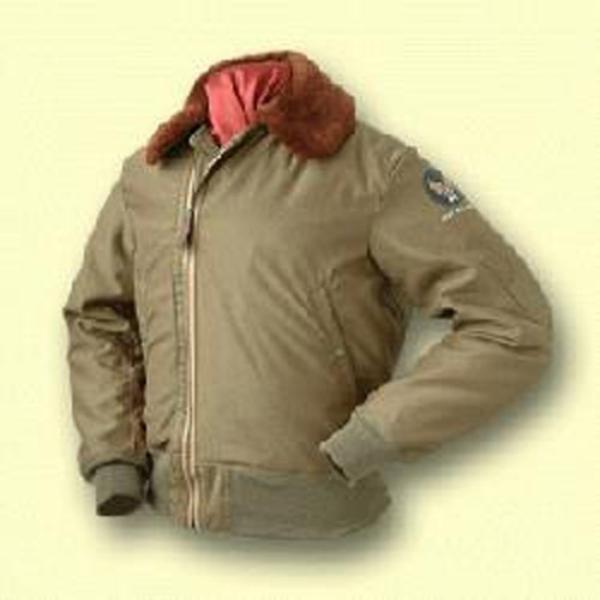 History
As early as 1942, the Materiel Division of the US Army Air Forces was seeking an alternative material to Sheepskin, for producing flight suits. By October of the same year, development had begun at Wright Field on the Intermediate Flight Jacket, Type B-10.


It was constructed of an outer shell made from a fine Cotton Twill, and an Alpaca/Wool pile lining. Standardized on July 22nd 1943, the B-10 was superseded less than 9 months later, by the B-15!


The B-15 enjoyed a much longer period of service than the B-10, evolving through several spec changes (A, B, C & D) which took the design up to the mid 1950's. As many jacket enthusiasts will know, the B, C & D versions were made with a nylon shell, and the wartime versions (B-15 & B15A) from cotton.

However, a very limited number of B-15's had their shell made from a unique cloth, constructed of a cotton and rayon mix.

In May of 1942 a company by the name of Hirsch-Werner Inc contacted the Army Air Corp offering a new, specially developed cloth, they called 'EndZone Twill'. It had been utilized in the manufacture of football pants, because of it's extreme durability and strength. They had heard that the US Military had been considering this particular type of cloth for use in aviation and parachute suits. Consequently, it was first used on the B-10 flight jacket, as trim for the underarm gussets and pocket linings.


When the B-15 was introduced, EndZone Twill was again used as trim in the lining. However, the Rough Wear Clothing Co along with a few other manufacturers, received contracts for B-15's to be made entirely of EndZone Twill. It is not known why only a few contracts were issued with this spec, but most probably it was due to the relatively high cost of the fabric, that prevented greater use of it.


As previously mentioned, EndZone Twill is constructed from a cotton and rayon mix - 100% cotton in the warp, and 100% rayon in the weft, giving the fabric a unique appearance of being shiny one side, and dull on the other. What makes it particularly strong is the density of the weave - with 140 yarns per inch, this is an extremely dense cloth, which looks, feels and wears magnificently.


The reproduction
For many years we have been requested by customers to produce a B-15. Having known about the Rough Wear, EndZone Twill version, we knew this would be the model to reproduce. But getting the fabric made was going to be a very difficult undertaking. Nevertheless, perseverance has prevailed! After endless negotiations and sampling from many textile manufacturers we have finally struck gold.


We are now able to offer the definitive reproduction of the B-15 Intermediate Flight Jacket. Our offering is a fabulous reproduction of the Rough Wear B-15 - contract 6338AF - made from the famous EndZone Twill. We are confident you flight jacket fans are going to love this one. And for those of you who have been patiently waiting for our B-15 release, your patience can now be rewarded, as you now have the opportunity to acquire the finest B-15 ever produced.


Specificatons
Our B-15 is of course authentic to the last detail: